The Astro A40 and A50 are two high-value headsets that are well-loved by gamers, streamers, audio recorders, and music lovers. Astro is renowned for creating award-winning audio headsets and they are a sister brand of Logitech, another audio engineering giant.

Both the A40 and A50 were originally designed for gaming so they have impressive audio feedback and are very comfortable to wear. They may look similar, but they have different designs and features that you can enjoy. So which model should you go for?

In this article, we will be reviewing and comparing the two models by their design and features, to help you decide which is the best headset for you. 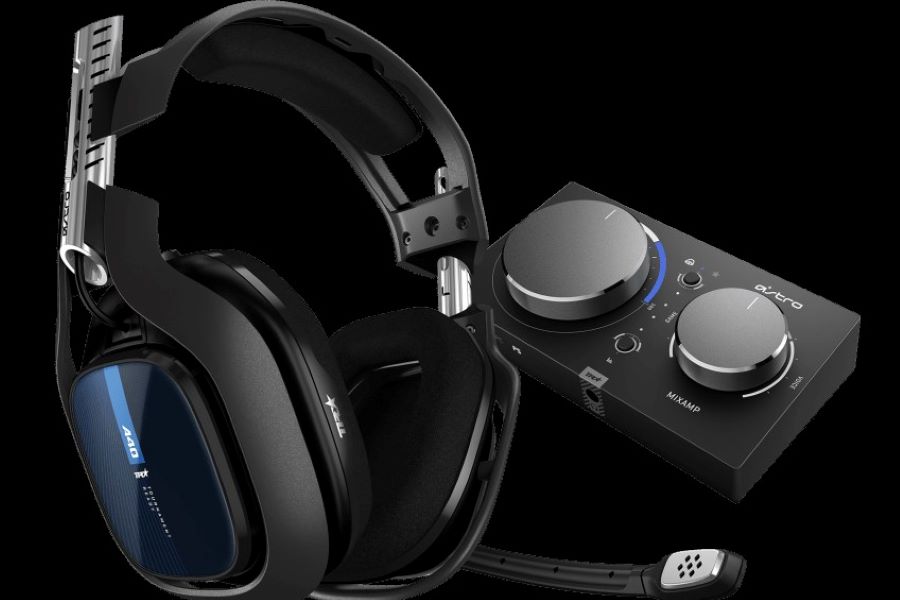 Right off the bat, the Astro A40 is a gorgeous-looking piece of kit. It has a luxurious black design that looks very professional. The TR stands for Tournament Ready because this headset is specially designed for a gaming setup.

The A40 arrives with a detachable boom microphone, which is a convenient feature. One minute you could be taking a call with the microphone on, then you can detach the mic and jam out to some music. In addition, you have the option of placing the mic on either the left or right side, depending on your preference.

The A40 can be bought in three different colors, depending on your taste. The three color variants are black with blue detailing, red with black detailing, and black with red detailing.

Both headsets make use of Astro Audio V2, which provides balanced sound and unparalleled audio clarity. It works by reducing by toning down background noise to accentuate more crucial sounds such as voice or game sound effects.

This gamer and developer collaboration has resulted in rich, nuanced sounds that take gaming and audio mastering to the next level.

The headset is open-back and features super soft ear cushions that keep your ears cool and dry during long listening sessions. The headband is adjustable so that it perfectly fits anyone and doesn’t move around.

The product weighs 0.80 lbs which is a little heavier than standard headsets. However, the weight is distributed well and designed to be comfortable for lengthy gaming sessions.

Extras In the Box

Here’s what you can expect to find in the product box:

The Astro A50 is a lavish wireless headset with a built-in microphone that is designed to provide top-of-the-range audio feedback.

While the microphone isn’t detachable, you can flip it out of the way if you aren’t using it. This flipping motion automatically mutes the microphone which is a convenient feature.

The wireless connection is very strong and has a 49-foot range. So even if you have a big space, you should easily be able to connect the headset to your device.

If you need to move around after sitting for long periods, you can keep the headset on and still hear what’s going on, as the earphones will stay connected.

The A50 weighs a little more than the A40, coming in at 0.83 lbs, but this weight difference is hardly noticeable.

The A50 also features an auto-off function, which automatically switches the headset off when they aren’t in use. Some users have complained that the auto-off time is too short which can be irritating.

Overall, many users have praised the A50 for its rich audio quality and attention to sound detail in music, movies, and games. As with the A40, the headset is tuned with Astro Audio V2 which provides smooth, like-like audio.

The headset arrives with the Astro Command Center Software, which allows the individual to personally tailor the audio to their needs. With the software, you can change things like audio balancing, bass, and voice.

To use the Astro Command Center, you must allow the software to do a brief download to your laptop or PC.

The headset also arrives with a 6-channel USB Game Channel which can be used with Dolby 5.1 to provide a surround-sound effect. This surround sound provides a rich listening experience that is perfect for music production, gaming, and watching movies.

Overall, many users have praised the A50 for its rich audio quality and attention to sound detail in music, movies, and games.

A50 Base Station Included

The A50 arrives with its own base station. Here’s what the base station is responsible for:

It’s a great gadget that organizes your desk set up and keeps your headphones fully powered up.

Of course, the cost of this base station is factored into the $299.99 price tag and you don’t have the option of purchasing just the headset alone. This is an annoying marketing technique, but it does mean you’re left with a great setup.

The A50 has an internal lithium-ion battery, which can be charged by connecting the headset to the base station through a Micro USB cable.

It takes roughly two hours to fully charge the headset, and this will provide you with a long 15 hours of use.

It also has a 20-month standby battery life, which is much longer than average. You could not touch the charged headset for a year, and you would still be able to use it instantly thanks to this feature.

One downside is that the headset doesn’t have Bluetooth capability, so you can’t connect it to your phone to listen to music or take calls. The headset only connects to its own base station through Micro USB, but the good news is that the Base Station has a 3.5mm jack AUX port to which you can connect your device.

Extras In the Box

Here’s what you will receive in your box:

If you’re an Xbox user, you’ll be pleased to know that the A50 arrives with a complimentary Dolby Atmos activation code. Access to Dolby Atmos for Xbox will dramatically improve the gaming sound experience, making the games more immersive than ever before.

When comparing the two products, there are a number of things to consider.

Firstly, if you prefer wired headphones, then the A40 would be best, and likewise, if you’re looking for a wireless setup, then you should go for the A50.

The A50 arrives with Dolby Surround Sound which will provide the best audio, however, the A40 uses Astro Audio V2 which is designed by gamers for gamers.

In conclusion, we have decided that the A40 would be the best option. Not only is it much cheaper, but it also has a detachable microphone. Furthermore, since it is wired, there is no sound delay when recording audio. This headset will work well in all listening setups and is a top-notch investment.

To recap, in this article we compared two sets of headphones, the Astro A40 vs the A50. Here are a few of the main differences between the two products:

We concluded that the Astro A40 is the better choice of the two headsets. Although the A50 has a more luxurious setup, the A40 has fantastic audio software and is much more affordable.

We hope that you enjoyed learning about the features and designs of the Astro A40 and A50. Now you can make an informed decision about the right headset for your needs.

Thank you for taking the time to read our article today!

Related: Arctis 7 vs Arctis 9 Review: Which One is Better?