How to Use the Behringer Xenyx 1204USB Phantom Power

The Behringer Xenyx 1204USB mixer delivers an option to mix up to six channels for your podcasting needs while keeping to a reasonable price. It comes with four Xenyx preamps on the initial four channels, then two additional stereo channels at the line level.

The dual bus design allows for signal routing to alternative sources, while two AUX sends per channel enhance that choice.

It uses a one-knob compression and three-band EQs while letting you record the output to your computer through the USB connection.

If that wasn’t enough, free podcasting and recording software comes with the mixer. That makes it quick and easy to start recording or mixing live audio from your home studio.

Related: How to Set Up a Bedroom Recording Studio + Ideas

If you use condenser microphones with the Behringer Xenyx 1204USB mixer, you can use the switchable phantom power supply. The preamps provide noise-free gain and minimal distortion while providing a balanced mic input for using the mono input channel through the XLR connector.

You’ll need to mute the playback system on the Behringer Xenyx 1204USB mixer before activating the phantom power. If that step isn’t taken, you’ll get switch-on thumps directed to the loudspeakers.

The red +48V LED illuminates when you have the phantom power on, activating it from the switch on the rear of the Behringer Xenyx 1204USB. Don’t connect the microphones to the mixer, wallbox, or stagebox when it is active to ensure system stabilization. Any monitors or loudspeakers should also remain muted for at least 60 seconds to avoid unwanted audio.

If you want to use the phantom power supply, you cannot use unbalanced XLR connectors on the MIC input.

Related: How to Connect a Sound Mixer to a Mac (and Garageband) 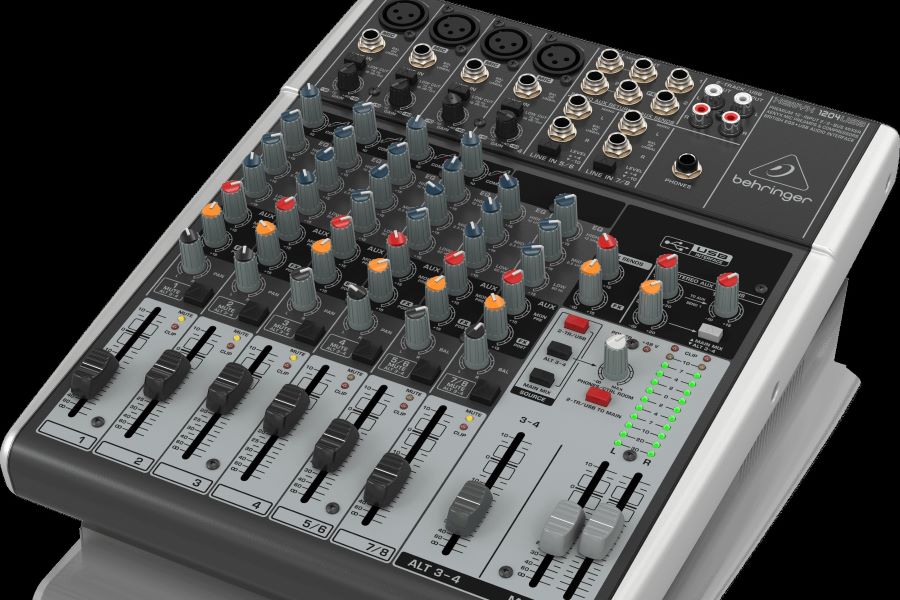 The computer connectivity you receive with this mixer helps record podcasts or deliver an onstage performance with the right hooks and overall energy.

You can record the stereo output in a home studio to almost any recording software. It also features an option to play the audio from the computer back through the mixer.

If you need live use, the Behringer Xenyx 1204USB lets you simultaneously mix and record. Bring a laptop, hit record before everything starts, and you can turn a performance, conversation, or interview into podcast-worthy content.

This setup makes adding backing tracks to an episode simple since you can route computer playback to the main output while managing a live mix.

Here are the features that stand out if you’re giving this mixer a closer look.

The board layout for the Behringer Xenyx 1204USB mixer is intuitive and logical. You can set the max audio capability and not continuously supervise it while recording, ensuring clear speech is present from beginning to end.

Related: RE20 Mic Phantom Power: All You Need to Know and Does the Samson Q2U need phantom power?

Since the 1204USB comes with four microphone channels, you can have a podcast recording session with two hosts and two guests – or whatever other combination of four you prefer. The three stereo outputs make it easier to manage remote guests because they can receive a mix without their voice.

The inputs and outputs let you add interstitials or prerecorded effects easily instead of putting them in during the editing or post-production phase. Since you can mix live audio, your content can get out to your audience quicker without as much of a time investment.

You can even use the Behringer Xenyx 1204USB mixer to customize the sound going to each speaker to ensure everyone in the studio can contribute with ease.

Is the Behringer Xenyx 1204USB Right for My Podcasting Needs?

The Behringer Xenyx 1204USB mixer is more for beginners, but it does serve a small studio well since it comes in such a user-friendly design. The controls are easy to use, and you’ll get immediate results that improve the quality of your podcast.

Since the interface connects directly to your computer, you’ll have direct control over the mix while managing each recording session. It can dramatically reduce your post-production work by helping you catch errors while monitoring.

The strength of the design is the four phantom-powered mono channels for mics, providing a warm audio quality with excellent bandwidth and range. It’s comparable to studio-grade outboard gear, delivering the warmth and clarity that podcast listeners demand.