How to Record A Podcast from Multiple Locations

Recording a podcast with people in several different locations can be challenging. You can either record audio through a remote recording platform, a video conferencing platform, or a sound mixer. Each one of these will produce different results, and so it’s up to you which one to go with, and which one makes the most sense economically.

How to Record Multiple People with a Remote Recording Platform

There are several remote recording platforms to choose from in order to produce a podcast with people in different locations. They include Zencastr, Riverside.fm, and Ringr. All of these programs allow for each person talking to sync up their audio automatically instead of having those large gaps in between one speaker and the next, or people talking over one another. This option is good for folks who have a good internet connection, a good microphone and quiet recording space. Before committing to paying for one of these platforms, do a free trial of each to do a mock podcast episode. This will let you see which one works best for you and your recording needs.

How to Record Multiple People with a Video Conferencing Platform 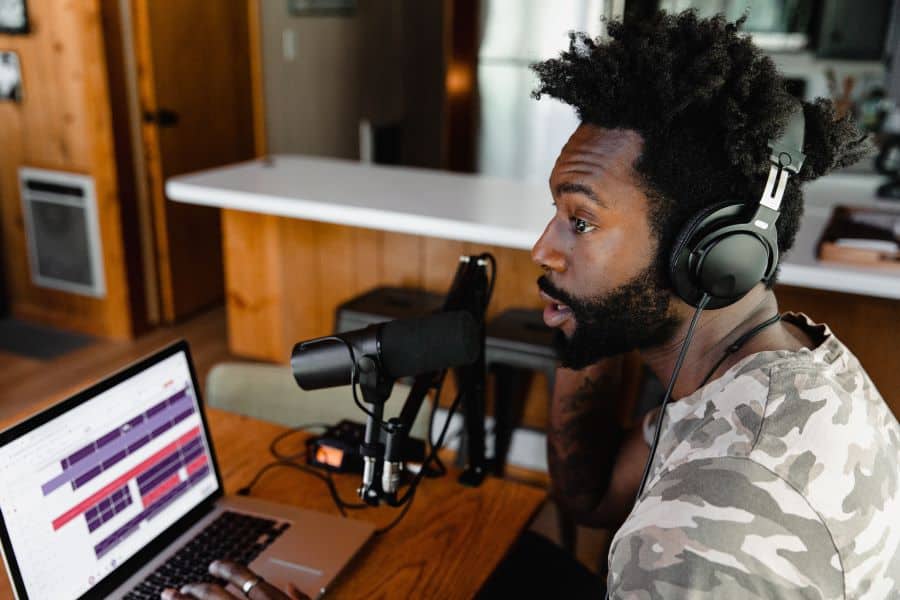 The challenge of recording podcasts with speakers in multiple locations can be tackled with modern recording capabilities.

Using a video conferencing platform to record audio is something most people are used to by now, so the learning process will not be difficult. Skype, Zoom, and others allow for you to record the video sessions along with the audio, but the audio will not sound nearly as good as it could with recording the audio through a remote recording platform or by having everyone in the same recording space. It also makes it harder to split the audio from the video if you want to edit certain sections of the recording if you are going for a vodcast.

However, it’s an inexpensive way to get the job done. Try to make sure everyone has a quiet space to record with a decent microphone and you will end up with a decent audio you can put out into the world.

Check out our guide on how to record a podcast on your laptop in 3 easy steps.

A sound mixer offers the most flexibility of all of the options available, but can be pricey and a bit of a learning curve to figure out. When you have the mixer connected to your computer, you can plug the audio directly from your phone into the mixer, which will be identified by the audio editing software on the computer. If you have a mixer that allows for you to record multiple audio tracks, it will make it easier to edit the audio later on. One tip that might help is instead of using your regular phone line on your cell, try using a program like WhatsApp that uses data to call your guests. This ensures less distortion in the recording.

If you want to record a podcast with different people in multiple locations, you can either use a sound mixer or recording platforms like Skype, Zoom, or those specifically for podcasters like Zencastr or Ringr to record with decent to great quality audio.