Jabra Elite 85t Review: Is It Worth Buying?

In an industry flooded with big names like Sony, Apple, and Samsung, which are known for their superior products, it’s easy for other brands to get lost in the shadow of their limelight. Although these models receive the majority of the attention, there are other lesser-known brands that offer the same quality. One such name is Jabra. Jabra may not have the same backing and name recognition as the big guys, but they consistently produce outstanding wireless earbuds that blow most of the competition out of the water.

A prime example is the Jabra Elite 85t wireless earbuds, which may just be their best model yet! Although they may not be a direct comparison to Apple’s Airpod Pros, they are a head to head with other top models on the market. 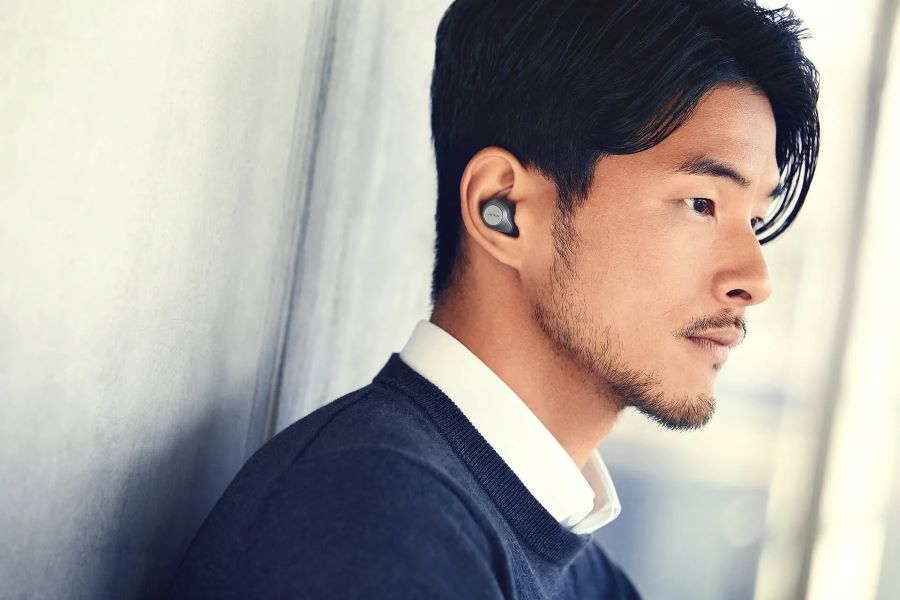 At first glance, the Jabra Elite 85t may not look much different than the 75t, thanks to its round body shape, prominent logo set on each earbud, and similar microphone holes. It also comes in many colors, a huge benefit for many users. The biggest difference between the 75t and the 85t appears with the former ear tips’ proximity to the earbud’s main body.

While the Jabra Elite 85t is technically an IEM, the ear tip doesn’t go as far into the ear as its predecessor, which could raise concerns about their stability during active wear. However, these fears are wholly unfounded since the 85t’s don’t even wiggle as you move your head around, even during intense movement, instead staying locked firmly in place. Additionally, they boast an IPX4 rating, giving users additional peace of mind knowing these sleek wireless earbuds won’t fall out as they move around.

The click buttons on the Jabra Elite 85t are very versatile, allowing you to perform a variety of functions quickly and easily. With one click, you can answer and end calls, put a caller on hold, switch between Hear Through and Active Noise Cancellation (ANC) modes, skip tracks, call Google Assistant or Siri, control playback, and raise or lower your volume. You can control all these functions using only the two push buttons located beneath the logo on each earbud, a streamlined and straightforward design that Jabra absolutely nailed.

It is important to note that while many will find the click button feature easy to use, it can be uncomfortable as you push on the earbud, especially when controlling the volume. To raise the volume, you must hold down on the right earbud while you hold down the left to lower it. The flip side is you don’t have to worry about issuing an accidental command, which often happens with other earbud brands.

The one main area of complaint with the Jabra Elite 85t’s design is how only the right earbud will connect to a device, while the left connects directly to the right. While the high quality ensures you don’t have to worry about latency, it is annoying that you’re stuck always using the right earbud if you choose only to wear one.

Related: IEMs vs. Earbuds: How to Choose the Right One for You

When speaking of comfort, the Jabra Elite 85t’s are surprisingly comfortable to wear, considering they are heavier than the Airpod Pros and only enter the ear canal slightly. That is, of course, if you can find the right ear tip that fits your ears. Although it’s safe to say that the ergonomic shape of the ear tips is mostly overstated, they do offer hours of comfortable wear even during intense exercise.

Is there such a thing as too many microphones? The SIX in each of the Jabra 85t’s earbuds may toe the line. Not to worry, though; these tiny microphones have a ton of uses, from giving commands to taking calls and enabling Hear Through and Active Noise Cancellation modes. When it comes to all of the microphone’s extra features, we’ll cover them in greater depth down the line; for now, let’s focus on how these microphones function when taking and receiving calls.

We hate to admit it, but when it comes to calls, these microphones fall short of our expectations. With a total of twelve in use (six per earbud), the quality for taking calls is just ok, especially in quiet surroundings. However, when in a noisy area, the noise cancellation technology is only so-so, falling way short of the standards set by Apple on their Airpods Pro. Additionally, when answering calls, the voice quality sounds small and far off, making it difficult for the person on the other hand to hear your conversation.

The conclusion? the Jabra Elite 85t is ok when taking calls, but you must be in a quiet space.

The Case And Battery

When it comes to battery life, the Jabra Elite 85t doesn’t disappoint. When Active Noise Cancellation is enabled, you can expect around twenty-five hours of battery life between the charging case and buds, with each bud carrying five and a half hours. Without Active Noise Cancellation, you can get up to thirty-one hours of life, with each bud carrying seven hours.

While there are other models like the Samsung Galaxy Buds Live that have a longer battery life overall, there’s no doubt the Jabra Elite 85t stands apart from the rest!

Another exciting addition is the fast-charging feature, which only requires fifteen minutes of charging to earn an hour of listening time. Plus, you never have to worry if your earbuds are correctly connected to the charger, thanks to a mechanical mechanism that always ensures a proper connection. You also have the option to wirelessly charge the case or use the USB-C connection, creating ultimate charging flexibility.

The Jabra Elite 85t’s have a wealth of features that are sure to impress even the pickiest user. As mentioned earlier, there are Hear Through and Active Noise Cancellation modes that offer natural ambient noises and powerful cancellation, respectively, which is another area where the six microphones come into play.

The best part of these features is your ability to fine-tune them using the app, which means you can create a customized listening experience. Speaking of the Jabra Sound+ app, it’s an exceptional example of what all the wireless earbud apps can aspire to, modeling intuitive design and ample features.

An example of the app’s intuitive nature is the Auto-pause feature that uses internal sensors inside the earbuds to pause the playback automatically when removed from the ear. These sensors are very accurate but can be disabled if you’d prefer not to use them. If you’ve misplaced one or both of your Jabra Elite 85t earbuds, simply turn to “Find my Jabra” to locate them. This feature will show you where you last used your earbuds and can emit a high-pitched sound that will help you more easily locate them.

You also have the option for simultaneous multi-connectivity, or in Lehman’s terms, you can connect to two devices at once. That means you can stay connected to your laptop and smartphone simultaneously! Switching between these devices is a straightforward process, but it does involve manually pausing the playback on the first device before you are able to switch to the other one.

Another impressive feature that needs highlighting is the Moments feature, which provides access to three preset functions (Commute, Focus, and My Moments.) The presets named Moments are how you can customize the Hear Through and Active Noise Cancellation settings. It makes switching between environments easy without making you manually adjust the settings every time.

Although there are many other features on the Jabra Elite 85, these are some of the most exciting and important.

Related: Jaybird X2 Review: Why We Love Them!

The best way to describe the sound in the Jabra Elite 85t is heavy on the bass. That’s not to say the rest of the audio is completely lacking; the overall sound is warm with adequate instrumental separation and an expansive sound stage where earbuds are concerned. However, there’s no denying that the intensive bass overbears the rest.

If you’re not into hard-hitting bass, don’t worry; Jabra has you covered. While straight from the box, these earbuds are extremely bass-heavy, the app offers a fully customizable EQ ability that allows you to even out the bass with some adjustment.

The standout audio feature on the Jabra Elite 85t is by far its Spatial Audio which creates an immersive experience that is almost incomprehensible for 12mm dynamic drivers. The only downside is that you can only use the Spatial Audio feature with HBO Max, Disney+, and Apple Tv, but for many users, this is the feature that compels them to choose the 85t’s.

There’s no denying that the Jabra Elite 85t’s have excellent sound quality, especially for the price. The EQ customization is a feature that is unmatched in many other models, making the 85t’s a step above. While finding anyone who wouldn’t find the sound quality impressive, it truly shines when listening to music that is bass-heavy.

Thanks to the wide range of features, extremely long battery life, comfortable and durable build, and exceptional sound quality that is easily adjusted to fit a variety of music genres, the Jabra Elite 85t is one of the best earbuds available for those willing to spend around $200 for truly wireless earbuds.

Did they live up to the hype of being the earbuds that brought down the Apple Airpod Pros?

It has a weaker Active Noise Cancellation mode, microphones that are only ok when taking calls, and sound quality that, while amazing, doesn’t deliver enough to bring down the Airpod Pros. That’s not to say it’s all together beneath Apple. The Jabra Elite 85t does have features that put the Pros to shame. The battery life puts Apple to shame; you can adjust the Heat Through and Active Noise Cancellation modes and switch between non-Apple and Apple devices seamlessly, three features where the Airpod Pros can’t compete.

It’s safe to say the Jabra Elite 85t can hold its head high as an equal contender with the big name brands that share its price point, a feat which is all the brand could ask to accomplish.