Starfinder is an exciting science fiction roleplayer game where the Game Master creates challenges for the other players to overcome. It’s full of excitement and adventure and is the inspiration behind many Starfinder podcasts. These podcasts feature real gameplay or creative interpretations, providing the listener with an entertaining and enlightening experience. There are many excellent options, but we’ve compiled a list of our choices for the best Starfinder podcasts, thanks to their entertainment value and content quality. Each one is sure to have you on the edge of your seat and playing along in your mind!

Related:The Best EDH Podcasts and The Best Board Game Podcasts for All Kinds of Gamers

Starfinder actual play podcasts follow the hosts as they play the game, giving the listener an exciting and entertaining experience set within the scope of the game.

Tableverse follows alongside the crew of the Terrapin as they navigate the far reaches of the universe. The team, including captain Eustace Qriana, Vesk Mystic Kobok, the Lashunta Envoy Pawl, and the Usagi Operative Quib take on missions that test their commodity and resolve.

Cosmic Crit follows the adventures of six friends as they explore the new world of Starfinder. Each episode features the hilarious hijinks the crew, which includes a veteran GM, some noobs, and a few RPG alums, gets themselves into, including hacking computers, uncovering clues, and of course, saving the universe. Cosmic Crit episodes are released every week, sometimes with multiple episodes being released in quick succession of each other.

Southern Tomfoolery takes the listener on an adventure as four friends take on the perils of the Starfinder universe. It takes its audience along as they learn the game, creating an informative and often hilarious podcast that reflects the mistakes and successes they have along the way. The podcast airs weekly on all networks making it easy to listen to on the go. For those wanting to follow along even further, Southern Tomfoolery recently added an additional podcast, Apollo Protection Agency, that brings the listener along on more of the party’s many adventures. 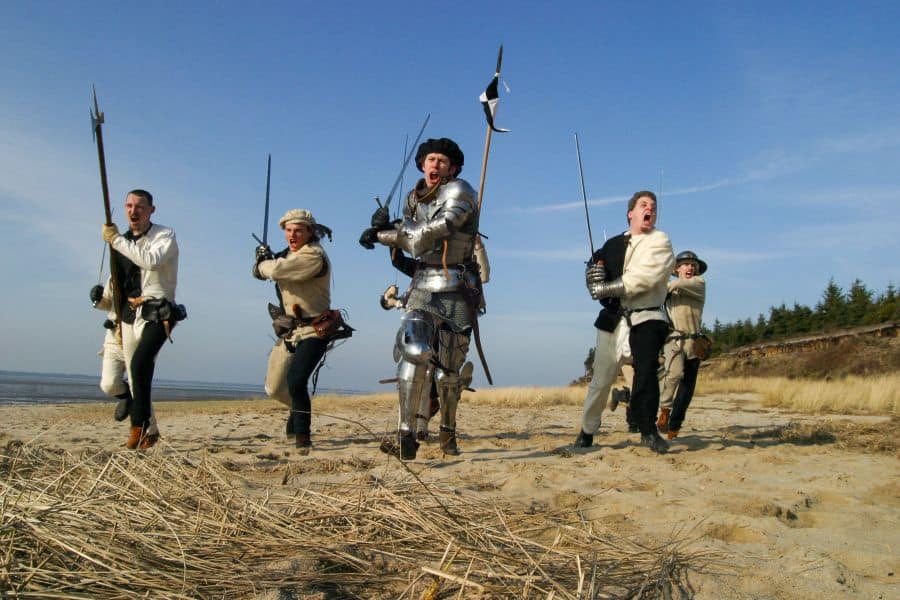 Androids And Aliens is a podcast set in the far distant future and follows five strangers who find themselves stuck in the center of an interstellar mystery threatening the existence of the entire galaxy. It is full of laughs and even some tears as the crew must make tough decisions to save the lives of billions of lifeforms throughout the universe. Androids And Aliens was launched in 2018 as the second weekly show on the Glass Cannon Network and quickly gained popularity on multiple streaming platforms. Episodes air on Fridays at 8 pm EST on Twitch and the following Wednesday everywhere else.

Sinister Shenanigans In Space is a podcast about a group of seven friends coming together to make their way through many adventures as they seek glory, revenge, and answers to their many questions. This dubious group will have you on the edge of your seat as they weave a captivating tale and bring the listener along for the ride. This weekly podcast is fun and exciting and will keep you guessing the entire time.

Will Save The Podcast

Will Save The Podcast takes listeners with four strangers as they begin a dangerous journey with the potential to unmask the secrets hidden within the darkest corners of the galaxy. Using storytelling, rolls of the dice, and a bit of luck, the crew will do whatever it takes to unravel the secrets and find the truth. Each weekly episode features a new and exciting adventure full of peril and thrills for the listeners and the crew.

The Space Bois Podcast is a horror-themed Starfinder adventure that follows along with six friends as they use Starfinder rules to get themselves pulled through the Signal of Screams Adventure Path. You can listen and join in as you find out what it’s like to join the friends as this horrific adventure tears them apart one at a time. Listeners will follow along as they fight with horrific monstrosities and grapple through their own terrifying thoughts, all while plunging headfirst into the unknown.

There’s nothing better than listening to a podcast based on one of your favorite hobbies, which is why we know you’ll love this list of the best Starfinder podcasts. Each one has a unique feel, with characters experiencing adventures and danger at every turn. Once you start listening, you’ll find yourself eagerly anticipating each upcoming episode and looking forward to playing the game yourself or with your friends. No matter what your taste in podcasts, there’s a Starfinder one that you can enjoy listening to week after week.