Although these two microphones are very similar and a part of the same series, the choice comes down to what kind of sound you are looking for. The RE20 offers a more natural sound, while the RE27N/D offers a brighter sound at a higher price. Let’s find out more.

Related: RE20 Mic Phantom Power: All You Need to Know.

Everything you need to know about the RE20

The Electro-Voice RE20 is considered the gold standard in broadcasting and was first released in 1968. There are very few mics that stand out like the RE20, especially for podcasters. Early podcasters wanted proven microphone designs that provided a reliable sound for broadcasting, and they often chose the RE20. Podcasters are still choosing this mic decades after its original launch. We covered the RE20 in our guide to the best podcasting microphones.

The RE20 is a cardioid dynamic microphone that comes at an affordable cost. The mic is perfect for informal studios for a number of reasons. It will record the sound from various angles, distances, and directions without catching excessive background noise. This feature makes it very different from other dynamic microphones, as it rejects background and ambient noise with minimal room treatment, making it a perfect choice in mic for podcasters.

One of the stand-out features of the mic is the pop filter which prevents any popping “p” sounds from being recorded while speaking.

The sound from an RE20 has a low-end resonance, a rare find in a mic, with a smooth and lush sound. The mic provides an authentic reproduction of sound, which is flat and accurate thanks to Variable D and the mics build.

The RE20 has remained so popular because of its ability to nullify the proximity effect, which cardioid mics aren’t able to do. This ability is largely thanks to Variable D, a signature technology from Electro-Voice. Most mics require that you be at a specific distance and position to catch the best sound, but the RE20 has a large sweet spot compared to any other mics, thanks to Variable D.

Variable D allows the mic to smoothly record from a variety of directions and distances, with a sound that remains full. Electro-Voice patented their Variable D technology to prevent the proximity effect from interfering with the sound cardioid mics produced. Proximity effect The vents on the mic are what enable Variable D to work.

Everything you should know about the newer RE27N/D 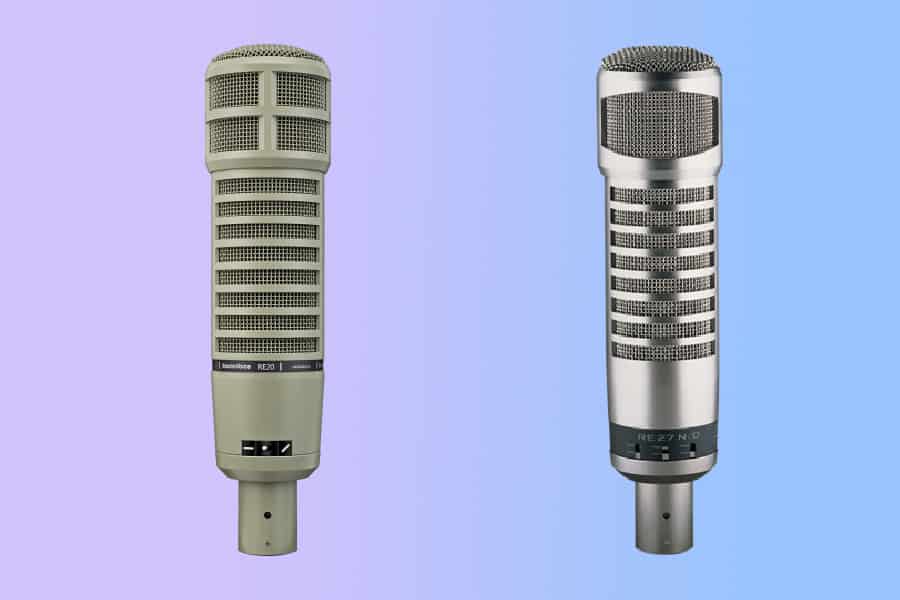 The Electro-Voice RE27N/D is the newer version of the popular RE20 mic. In 1986, Electro-Voice began releasing microphones with rare earth neodymium magnets, creating the RE27N/D microphone. It shares many of the features that make the RE20 such an excellent mic for podcasters, broadcasters, YouTubers, announcers, bass drums, etc. Although these mics share the popular characteristics of Electro-Voice mics, there are several key differences.

Both the mics have a similar retro look and quality feel, with some key differences in sound. The RE20 has a great sound that is more natural with a flatter response. In contrast, the RE27N/D produces a slightly higher output sound than other dynamic mics due to the neodymium magnets.

When the RE20 was first released, there was an issue with the mic detecting soft-spoken voices. Lighter tones are not detected by the mic very well. The RE27N/D addresses this problem with its added sound sensitivity.

Making a choice between the Electro-Voice RE20 and the RE27N/D comes down to sound and what sound you want from the mic.

Like the retro sound of radio? The RE20 delivers on the darker and more radio-type sound, making it a great choice in mic if you like a natural sound. If you like a mic that produces a rich, natural sound and you have a deeper voice, the RE20 is going to be a good choice. The RE20 also requires minor editing after recording because the recording is true to sound.

On the other hand, if you have a softer voice, the RE27N/D mic may be a better choice because it can pick up the higher notes better than the RE20. The RE27N/D comes with a higher price tag, as it has a few more tech features than the RE20, like the added switches and the neodymium magnets.

Deciding between the Electro-Voice RE20 and the RE27N/D mainly depends on the type of sound you’re looking for from a mic. The RE20 is a solid all-rounder, has an outstanding natural sound that won’t require a lot of editing, and has an old-school retro look. The RE27N/D has the same retro feel and long-lasting quality but is likely a better choice for those with a softer voice who may enjoy extra features and brighter sound.