HyperX Cloud Alpha S Review: Is It Worth the Upgrade?

In an effort to upgrade the original Cloud Alpha headset, HyperX introduced the Cloud Alpha S, but how does it compare? Let’s take a look and find out.

Although the HyperX Cloud Alpha S has stunning aesthetics, the lack of new and exciting features does little to distinguish it from the original. All in all, if you already own the Cloud Alpha, there really is no good reason to make the upgrade.

Don’t get us wrong, it isn’t a bad purchase, but let’s look at it a different way. Imagine having to use an Xbox One X on 1080p instead of 4k despite having paid the extra charge for it because it wasn’t equipped to deliver. The original HyperX Cloud Alpha offered phenomenal value for the price, which came in around $100. It sounded awesome, was comfortable enough for hours of wear, and had a beautiful design, so fans were excited when the company announced it would release the Cloud Alpha S.

With the Cloud Alpha’s respectable original design, HyperX aimed to build on it, adding features like analog bass sliders, virtual 7.1 surround sound, and much more. The downside was that the upgrade increased the price by over $30, which raised eyebrows and prompted concerns. Many wondered if the new features added to the HyperX Cloud Alpha S were worth the higher price tag.

Let’s take a look and find out. 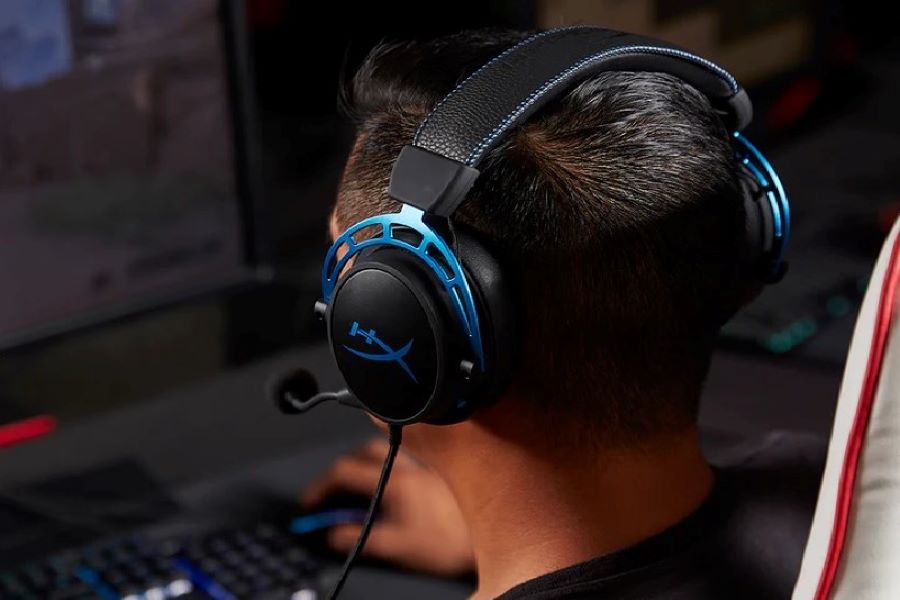 From the first glance, you can see one of the most noticeable changes made with the HyperX update, a new and improved paint job. Gone is the basic black and red exterior; the HyperX Cloud Alpha S boasts a sleek and elegant blue and black design, highlighted by complimentary blue stitching throughout the headband.

With a headband made of durable aluminum, these headphones can withstand more intensity without the user worrying about breaking. Although you still wouldn’t want to bring this headset with you outdoors, even with this more durable upgrade, the more minimalistic design is a definite improvement over its predecessor. For those who are fans of keeping their look simple, the blackout version, featuring an entirely black exterior, is sure to turn heads.

Although when it comes to headsets, color isn’t normally an area that stands out, the HyperX Cloud Alpha S did it right, effortlessly pairing function and form without sacrificing style. Located on the ear cups are two plug cavities, one for a 3.5mm cable and a detachable microphone. There is also a bass slider, which provides less or more reverberation space depending on if you choose to open or close it.

Although this sliding feature is cool, it can also feel gimmicky, considering it’s the only one that allows this type of adjustment.

When it came to comfort, there were few headsets that could compete with the initial HyperX Cloud Alpha, and users will be happy to note that the Cloud Alpha S carries the same legacy. The clamping power is ideal, resting on the head without causing painful pressure points or pressing too firmly. Although not made entirely out of plastic, the Cloud Alpha S is still very lightweight and adjusts well to fit virtually any head.

The padding continues to be extraordinary, never causing the headset to feel uncomfortable or heavy during use. It also comes with two sets of ear cushions made from faux leather or foam. While they both are soft, they each have their own features; the faux leather pads are great for containing bass, and the foam pads are cooling and help reduce sweat. Having options is great, but the act of swapping the pads is tedious and is most likely not something anyone would want to do daily.

However, even if the user never changes the ear pads out, it’s still a pretty cool option to have!

All said, the HyperX Cloud Alpha S model is just as comfortable as the original, allowing for hours of comfortable wear without pain or discomfort.

Fans of the original Cloud Alpha will be happy to find that HyperX continued the popular dual-chamber design that set it apart from others. The HyperX Cloud Alpha S contains a dual-chamber driver and 50mm neodynamic magnets, a welcome addition for fans. It also includes a newly integrated virtual 7.1 surround sound system, but this isn’t your grandma’s run-of-the-mill surround sound.

The HyperX Cloud Alpha S comes equipped with a detachable 3.5 mm cable that offers unmatched versatility, allowing you to plug it into your smartphone, PC, console, and more. But, if you’re looking to use the virtual 7.1 surround, you’ll need to insert the cable in the included mixer amp. This mixer amp features a remote and an additional cable set with a high-quality USB connector on the end.

To use this extra feature, you must use each cable simultaneously, which, due to their long length, can get really annoying, quickly. For users that hate using wired headsets due to the cables always getting in the way, it’s important to note you’ll have more than a few inches of cables in between the audio source and you.

With the controls attached to the cables, you can control the chat and game volumes separately and mute them as you please. The button design is large, which is nice for ease of use since you can operate them without looking. The problem comes in with the placement of the controller. Since it’s at the meeting point of both cables (which are in themselves fairly long), it can feel impractical when used.

It is nice to have the option to control your chat volume during gaming without making yourself vulnerable, but the jury is out on whether the benefits outweigh the frustrating long cable length.

Related: Arctis 7 vs Arctis 9 Review: Which One is Better?

The Cloud Alpha S features a noise-canceling, detachable, and bi-directional microphone that makes positioning a breeze. The problem that arises is even if the microphone is in the ideal spot, it’s still relatively quiet.

We’re not saying it has poor quality; it is clear and great for casual gaming; we’ve just seen more impressive options at more affordable price points than the HyperX Cloud Alpha S. One strange occurrence with the microphone is how the cable directly affects how the voices sound and the audio actually came across crisper and fuller without the mixer amp than with it!

This phenomenon is made worse by the fact that the majority of the newly added features are within the included USB cable, making it the culprit of the $30 added cost. Finding that this cable was the main area that failed to live up to its potential is a disappointment, to be sure. When using it for casual gaming, it will work ok, but knowing you must give up almost every new feature for microphone optimization is disheartening.

We know that the HyperX Cloud Alpha S looks great and is incredibly comfortable to wear, even though the microphone doesn’t live up to expectations. Sound quality is all that’s left to determine if these headphones are worth the investment. How do the Cloud Alpha S headphones sound?

In a word, awesome! That’s due to its dual chamber drivers we spoke of earlier.

Each chamber is responsible for a different aspect of the audio, with one covering the highs and mids while the other bass. This separation ensures you don’t hear jumbled frequencies, an occurrence all too common in many other headsets. So you get explosive lows that don’t sacrifice the warmth and richness of the highs and mids. The dual chambers also help stop higher volume distortion, meaning you can turn the volume up without sacrificing sound quality.

You can also use the included bass slider function mentioned at the start of the article for intensity adjustment in real time. You can choose to open it fully for a punch of bass, close it to keep the bumps down or find a middle ground for an excellent balance.

There’s no doubt the bass slider is a cool feature and really fun to use. However, as time goes on and the newness wears off, you start to realize you’d like to be able to control the rest of the frequencies this way, and you begin to determine a regular EQ may be more useful.

Regardless, the regular stereo sound in the HyperX Cloud Alpha S is incredible, a description that can’t be said about the virtual 7.1 surround. Yes, it may do the job and add a level of positional awareness, however, this comes at the cost of your overall quality of sound. Since this headset works so well during stereo mode, the chances are high that many users will choose to forego virtual surround in order to maintain an overall higher audio quality.

When it comes to the HyperX Cloud Alpha S, we have mixed feelings. Since its basic foundation is the Cloud Alpha, it’s an excellent overall headset, unfortunately the newly added features fall short. This conclusion is mostly due to the disappointing virtual 7.1 surround sound that is truly worse than the original stereo mode. Add to that the fact that the microphone functions better without the mixer app, which is responsible for the $30 price increase, and the included cables are long and cumbersome.

It is cool having the ability to control the chat and game volumes separately with one cable, but this one feature can’t hold up an entire headset. Yes, the colorway is stunning, but it isn’t worth an additional $30.

All in all, standing on its own, the HyperX Cloud Alpha S is a good headphone, but when compared to its predecessor, which is equally comfortable and sounds great for less money, it can’t hold a candle. It would appear that this headset is doomed to live in the shadow of the original forever.