Should I Record My Podcast in Mono or Stereo?

When deciding on mono or stereo playback for your podcast, generally speaking mono is the best choice for solo or interview podcasts as it offers a simple solution for a simple sound, such as people talking. While stereo is better used in podcast dramatizations and NPR as it adds a layer to the emotional performances and situates the audience in the scene.

Differences Between Mono and Stereo

To identify the differences between mono and stereo, you simply have to look at the Greek root meaning of each word. The root, mono, means one. The root, stereo, means solid and three-dimensional. To create a mono sound, you simply use one channel to convert signals to sounds. Stereo sound is produced through multiple channels instead of one.

This means that Mono will play the same waveform on both the left and right channels while Stereo will play different waveforms between the channels. In a Stereo recording, you may be able to tell someone is speaking to the right of the microphone because you’ll hear them louder through the right speaker than through the left speaker.

This is why Stereo is great for dramatizations as you can have actors play in the 3D audio space where positioning is part of what sells the story. And why if it’s just a solo or interview podcast, it’s better to use Mono. This is because the information is what’s important in those situations.

How to Record the Best Sounding Podcast 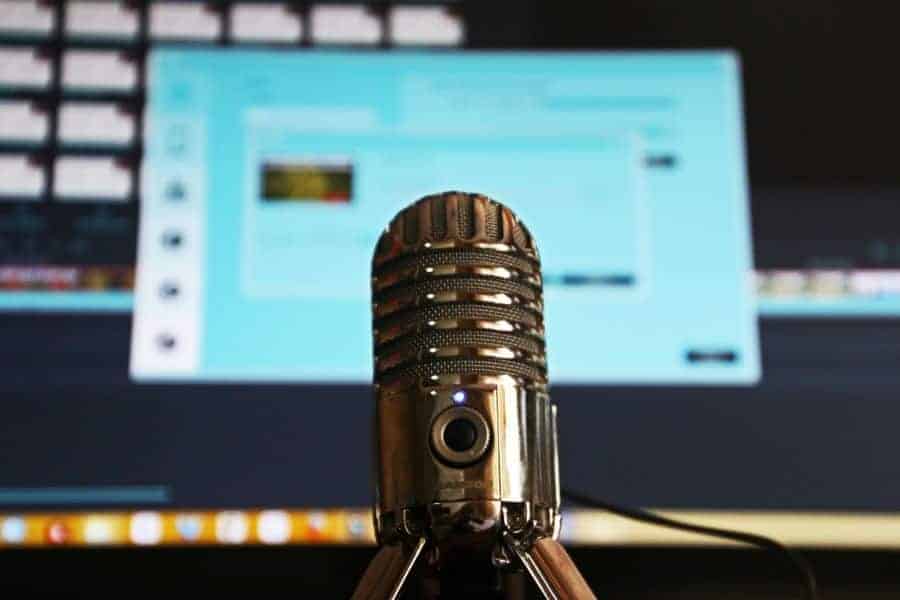 Generally speaking, mono is the better option to record your podcast in.

Though producing a podcast in mono might be the right choice for most people, there are other steps you need to take to ensure you have the very best sounding podcast. One thing, and perhaps the most important, is using the right equipment. Recording equipment includes software, microphones, headphones, pop filters (that keep your microphones from making those popping sounds), audio compressors, and more. Aside from equipment, understanding how to speak on a podcast, with the correct timbre and tone, can take a while to achieve. Even the room you use will make a huge difference if it is not sound proofed or the acoustics create echoes that interfere with the dialogue on the show.

Do Mics Record in Mono or Stereo?

The mic capsule in a microphone, or the tube-like part inside the microphone, captures sound waves and converts them to audio signals. While most microphones only have one capsule to send these sounds, some microphones have more than one capsule which output several different mono signals that are then mixed afterward in the studio.

You can also set up two or more microphones to record in stereo if you’d prefer.

Whether you prefer stereo sound or mono sound, mono sound is the preferred sound by most podcasters because it offers a direct speaker-to-listener sound, instead of having several layers of sound coming from different channels in the recording. There is no real need for stereo sound unless you are producing drama podcasts or NPR.